I have paid heed to the invisible and the disappearing in my work over the last 20 years. Something disappears the moment people don’t feel it, but it cannot be replaced with others things like the money and honor people aspire to gain. On display at this exhibition are works such as Botong whose concept is profoundly influential on Korean people’s lives, What’s Missing-Your Dream, a work employing the motif from the Survey ‘the Dream you thrown away’(since 2008), and I’m sorry but I didn’t know, a work that is a metaphoric representation of the reality in which there is a victim but there is no aggressor. These works are all based on Seen & Unseen, but each work has the different concept of “absence.”
These works particularly feature the absurdity of reality in which the invisible wield strong influence over people, people’s fatuity and cruelty, and my weakness that I have to admit the reality that I cannot help but be in such a society.

detail)  This Work is a subjective measurement of the Hyesoo Park's interpretation of 20 English words that can be interpreted as Botong.

“ Which dream did you give up?”

To look into the disappearing hopes of Korean socoerty, I have conducted surveys of more than 5,000 Koreans about the "dreams of giving up" since 2008.
The survey was maily conducted through questionnair paper, but in the exhibition space a manual typewriter was installed to get answers from the audience. In answer to questions raised by the Ilmin Museum of Art in Seoul in the work ‘Missing -Your Dream’ in 2017, I wrote a pencil on the penel in this exhibition.

Song 'The song of a child who lost the way of telling, keeping the secret' _ Minkyung Bae_2018
"There is a victim but no aggressor!” My mother taught me that women must endure even while going through something shameful during my childhood. She would insist that we women should not air our dirty laundry and embarrass the family and we didn’t need to become the topic of conversation of others. At some point, the weak including women have kept their silence even though they are treated unfairly. This it probably because they have undergone the fact that absurdity in our society is not removed even if we reveal that something is wrong. I also cannot advise them to disclose damage after witnessing a victim turned to a suspect. Meanwhile, a suspect holds his head high, clamoring that his deed is justice. Others do not come forward.

As everyone becomes a coward, victims strive to return to their initial appearances behind the wall, under the stairs, or in the dark. My old friend S used to sob while taking a bath, speak to a book, take a deep breath, look up in the sky, and sing a song at the foot of the stairs. If someone appears, she returned to her original appearance, an emotionless way of talking and deadpan face. Her objective was to stay unnoticed.

“Why don’t you do anything? Aren’t you bitter? Why don’t you demand an apology?” I asked.
“He apologized to me. I am not sure he meant it.”
“What did he say?”
“He said he was really sorry. But, he didn’t know.” 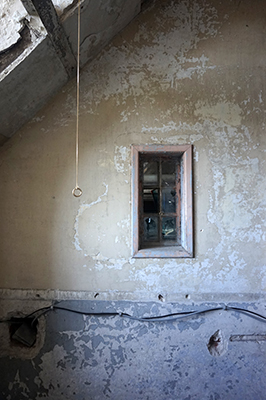 This work is a representation of solace for those who endure pain in silence. For this, I asked a sound artist Minkyung Bae to sing her song as if reciting her own story, telling her about my friend S. And, I installed a motion sensor for this to work in darkness when nobody is here. You can't move there if you want to listen to her story. You can hear her song when no movement is sensed.

Symposium) From Vertical to Horizontal: The Changed Conditions of Art Production _2018.5.30_MMCA